The characterization testbench schematic for a nominal NMOS transistor in technology is displayed below: 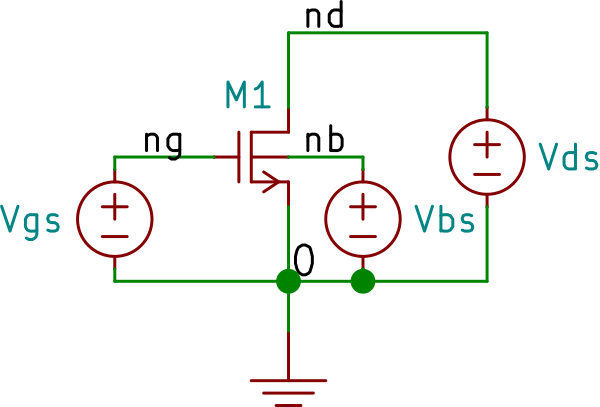 We will be plotting the normalized transistor large-signal I/V transfer curves.

For the I/V characterization curves, a minimum transistor length of L=130nm was used together with a total width of 10um (Wf=1um, Nf=10, m=1). 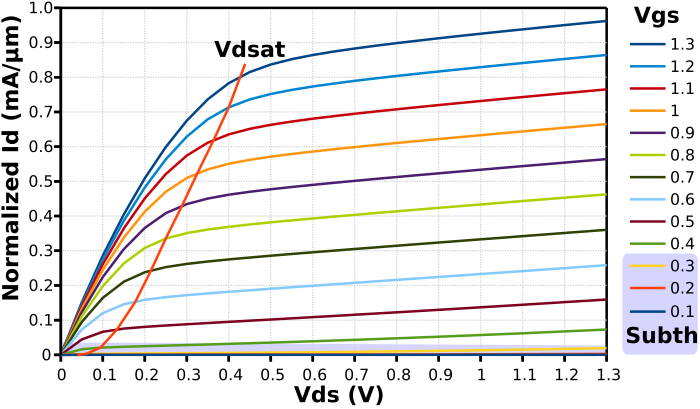 The following are the simulated Vdsat values for each Vgs curve for reference (these are evaluated at Vds=Vdd bias conditions):

Looking at each operating region, A couple of helpful insights can be provided given our DC transfer curves above.

The maximum current density is attained in deep saturation (maximum Vds) and strong inversion (maximum Vgs). For our NMOS device approaches the traditional "rule of thumb" max figure of 1mA/μm; this is always helpful as a sanity check.

Keep in mind as well, if we want to bias the device at a different inversion level (e.g. weak inversion), these DC transfer curves are useful to understand the maximum attainable current density under those bias conditions; and hence the minimum device width required for the desired bias current.

Also, in designing an amplifier where a large output swing is expected at the output, we often want to set the Vds bias voltage at the mid-point between our supply and the min vdsat for the desired gate-source bias voltage and operating region: this will help us yield the largest swing while maintaining the transistor in saturation. We can do this graphically and more intuitively using a load line analysis.

If we instead are looking into the design of switches, we can make use of these transfer curves to get a good idea for the Ron (ON resistance) or alternatively the Gon (ON conductance) we can expect for the transistor device in triode over a range of vds voltages across; recall triode devices experience non-linear resistance.

Hence for a standard minimum length switch device, sometimes if you know the DC voltage across the switch plus necessary Gon, we can conveniently calculate the necessary width.

Although note in the design of switches we should also understand the parasitics which would set not-only the RC corner frequency/bandwidth of the switch but also the gate-drive requirements. (i.e. if we opt for a very wide switch with low Ron we pay a price in drive power for certain and could pay a price in bandwidth depending on the RC of the switch.) 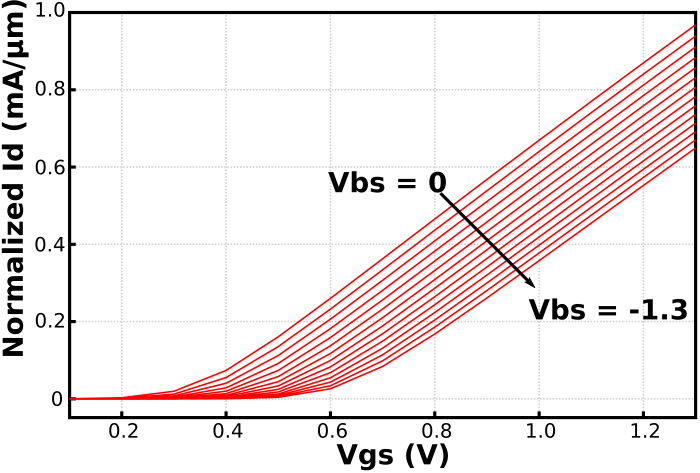 This Vbs (or Vsb) bias, either applied by design or as a result of the topology employed (e.g. where the source is not at the lowest bulk potential) can result in modulation of the device threshold voltage, or can also be seen in a different way as a "back gate" (given a fixed Vgs bias) -- although with a lower transconductance.

Looking at each operating region, A couple of interesting effects can arise as a result of this back-gate bias (more often than not in ways that are detrimental to the circuit performance).

In biasing a device in saturation, one must be aware of the impact a back-gate bias has on Vth, Vgs and the Vdsat of the device.

In most cases, with the increases in source voltage, Vgs decreases proportionally (assuming fixed bias gate voltage), what this means is given Vdsat = Vgs - Vth (to a first order), with decreasing Vgs and increasing Vth our Vdsat decreases and for the same bias conditions, the device is further in saturation; this may alter our desired operating point. Hence one should take care to consider the effect on Vth, the actual Vgs, and resulting Vdsat when biasing the amplifier in sat region.

Another perhaps more important effect of the increase in source voltage is the change in the inversion level of the device. Naturally, With the decrease in Vgs the device is placed into weaker inversion, moreover the simultaneous increase in Vth due to the body-effect, places the device into a further weaker inversion state where one may see a large degradation in bandwidth but a larger gm/id transconductor efficiency. Lastly, as both Vgs and Vth are changing inversely, if care is not taken to account for this, a device can even go into cutoff (where no inversion layer is effectively present).

We can see the body-effect first-hand in the plot above, for the same drain to source voltage, in order to attain the same current density given a lower Vbs bias (or equivalently a larger source-bulk voltage) we need to increase the device Vgs. The back-gate bias increases the threshold, effectively putting the device in weaker inversion: hence to reach the same original inversion state (and drain current) we need to increase the Vgs voltage.

In the case of the device biased in triode region, we can see that the back-gate much like the device's gate gives us some degree of non-linear resistance control; however, in most applications if a device in triode is employed, feedback is used to arrive at a desired resistance value (except in cases where the actual resistance value is not critical e.g. pull-up/down devices).

The transconductor nominal design parameters are plotted below for the reference minimum-length transistor with various back-gate Vbs. Here you can see graphically some of the effects of Vbs on small signal performance.

Most important are the design parameter plots for Vbs=0V (i.e. with no back-gate voltage): These plots are most useful for starting choosing a Veff bias point to start a design. 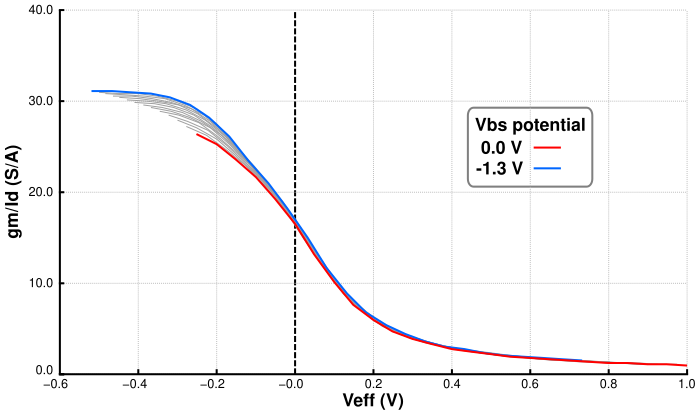 The gm/Id design parameter is extremely useful for designing power efficient circuits. This parameter, namely the transconductor current efficiency, tells you how much transconductance gain you can get per bias current spent. As can be seen above, there is a fundamental maximum value that can be attained governed by physical laws.

Where U_T is the thermal voltage (kT/q) and n is the device's sub-threshold slope factor.

In fact, as power efficiency is concerned, it will be shown there is a clear trade-off between power, area and speed. 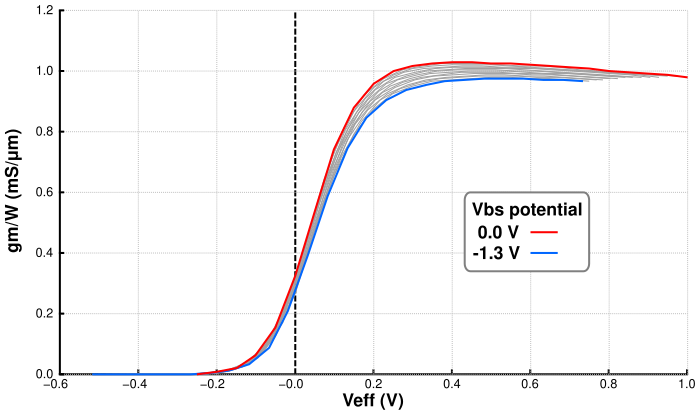 The transconductor area efficiency design parameter tells you at a particular overdrive bias point, what the width needs to be in order to meet a required gm.

For instance, if you opt to bias your device in weak inversion say in order to operate at high gm/id and hence spend little current for your necessary gm; invariably as can be seen on the left-hand side in the plot above, you will need to operate at low area efficiency therefore you will need to employ a large area (you are trading off area for low-power) to attain such gm.

On the other hand, if you'd like to reduce the area footprint by operating in strong inversion (at large gm/w) and choosing a small w to meet your necessary gm, you will need to operate in the low gm/id region and hence spend more power to yield the same gm (you are trading off power for low-area). 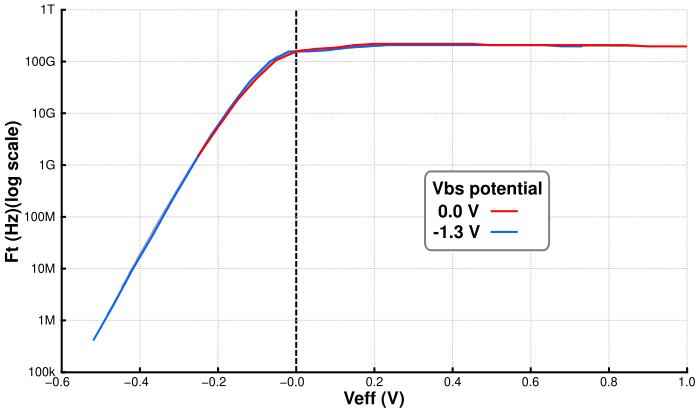 As is well known, in order to squeeze as much speed for your device, you need to operate in strong inversion where the Ft and hence bandwidth of your device is at it's maximum (keep in mind the plot above is in a logarithmic scale).

Hence we have the three fundamental tradeoff's that define your design choices based on your primary requirement: 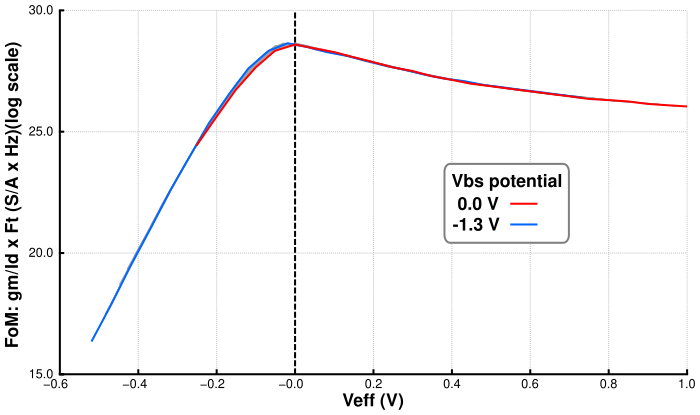 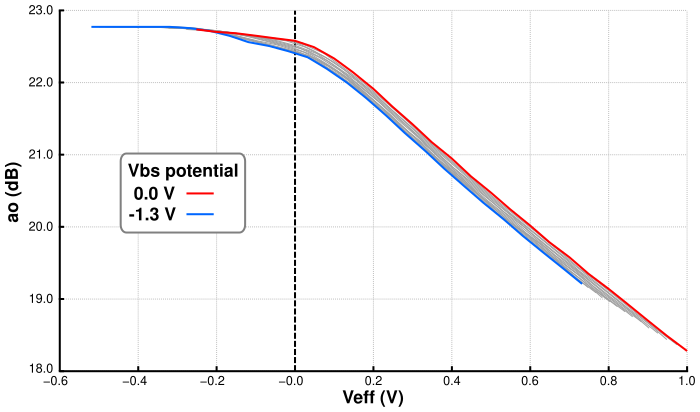 Design parameters are plotted below for a set of transistors with lengths spanning from 130nm to 3um (roughly following technology nodes progression) to help compare trade-offs in choosing device dimensions (width chosen as before). 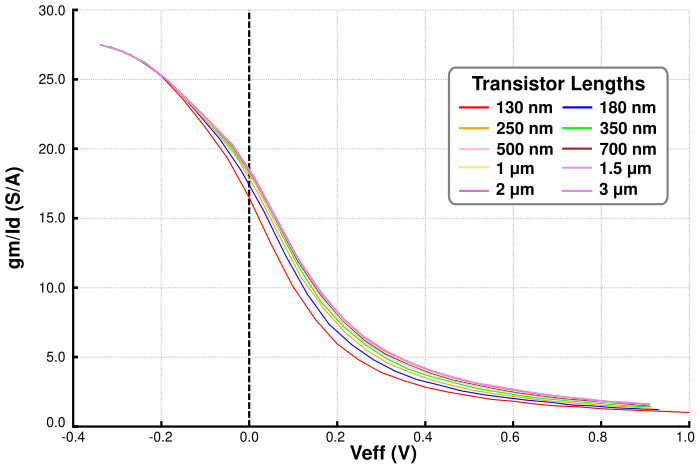 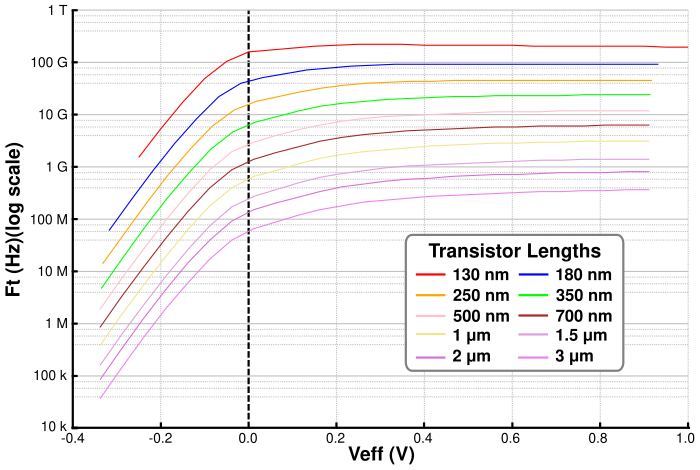 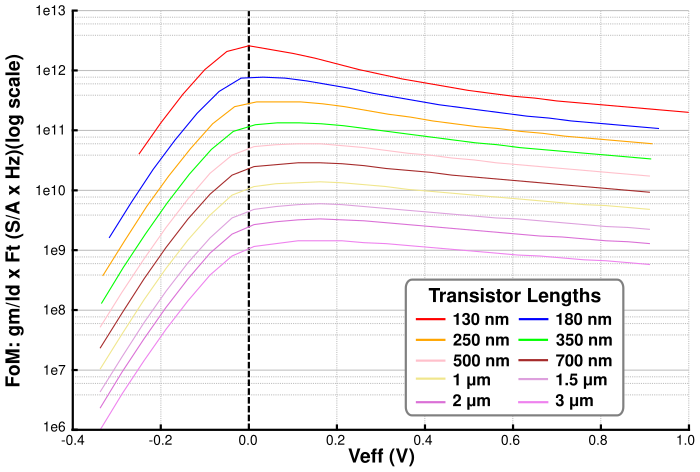 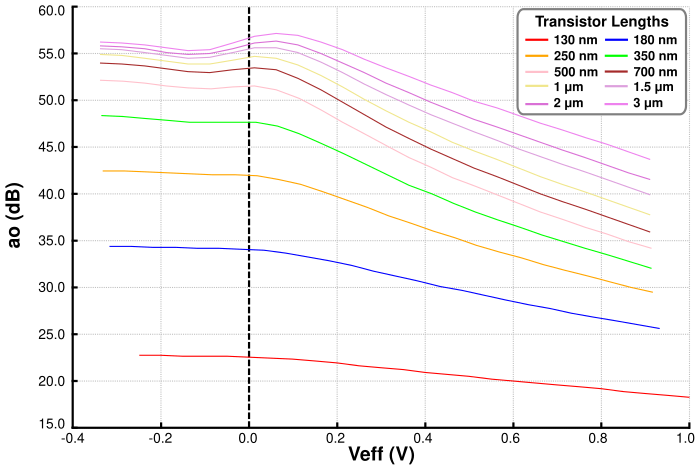 Another important thing to consider is noise introduced by the device itself, here again one must increase power if it is desired to reduce intrinsic noise.

(currently just a placeholder) Need to expand this and correct from notes, also move out of here to include elsewhere, perhaps with tran noise sims in another section

Recall fundamentally, if we look only at thermal noise (Major contributor at frequencies beyond 1/f knee in spectrum).

Where the f_bw relates to the applicable noise bandwidth integrated over.

If then we consider thermal noise is due to brownian motion in conductive (resistive) elements, we can express:

And we arrive at a common metric for effective noise voltage (volts square per hz or volts per root hz):

Please feel free to make edits to improve this page directly, or leave us feedback in the discussion section above. (see edit and discussion links atop this page)

Retrieved from "https://icclopedia.org/w/index.php?title=NMOS_characterization_(PTM_130)&oldid=621"
Categories:
Cookies help us deliver our services. By using our services, you agree to our use of cookies.